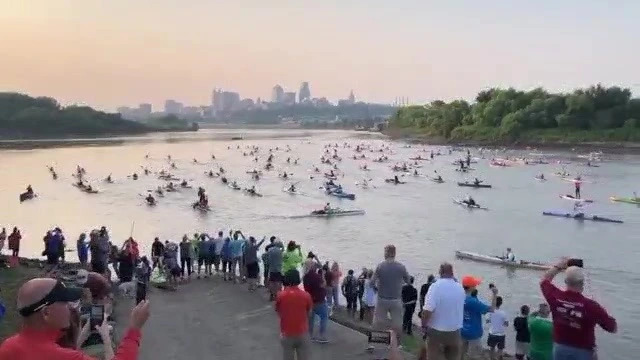 ST. CHARLES, Mo. – Hundreds of paddlers will take on Missouri’s waters for a cross-state, nonstop river race that begins Tuesday. The multi-day competition is set to end Friday in St. Charles.

The premier paddling event is known as the Missouri American Water Missouri River 340 river race. Organizers say the MR340 is the world’s longest, nonstop race involving canoes or kayaks, boaters can choose to paddle all day and night or take short breaks. The event aims to support river preservation and environmental stewardship.

More than 600 people, some as groups and some as individuals, began the 340-mile trek on Tuesday near Kansas City, Kansas. Solo paddlers have 86 hours to complete the course, while groups must complete the race in 85 hours. There are nine checkpoints along the route, and cutoff times will be associated with those checkpoints based on the 86-hour pace.

Organizers say the champions could arrive at the race’s endpoint by Wedneday morning. Competitors have until Friday’s 7 p.m. deadline to make it to the Lewis & Clark Boat House & Museum in St. Charles. Around two-thirds of registered paddlers completed the race last year.


Ready to save? Here are the best deals of Prime Day 2022

Returning for its 17th year, the MR340 is described online as a one-of-a-kind river experience:

“Imagine a race across the entire state of Missouri, just you and your boat thrown against 340 miles of wind, heat, bugs and rain. This ain’t no mama’s boy float trip. This race promises to test your mettle from the first stroke in Kansas City to the last gasp in St. Charles. Just entering it will impress your friends. Finishing it will astound them… and winning it? Well, you always thought you were sort of a legend anyway, didn’t you? It’s time to prove it.”

Proceeds will benefit the Missouri River Relief and the Lewis & Clark Boat House & Museum. For a map of the race course and various checkpoints, click here. For more information on the race and celebrations planned around it, click here.