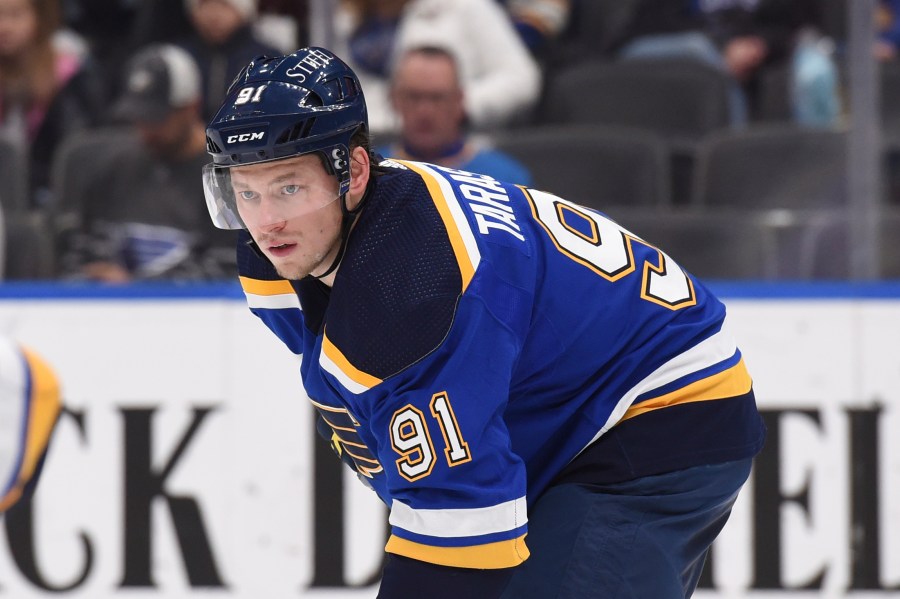 ST. LOUIS – The 2022 NHL Draft has passed, and Vladimir Tarasenko remains with the St. Louis Blues. For now.

Tarasenko, a ten-year NHL veteran and a former 40-goal scorer, has been the subject of trade buzz since last year, when The Athletic reported that he requested a trade after frustration over a pair of recent shoulder surgeries and the team’s medical response.

The Blues’ longest-tenured forward is entering his contract year, and that hasn’t slowed down speculation on his future. Earlier this week, prior to the NHL Draft, Frank Seravelli of Daily Faceoff released his list of the top 15 trade targets of the offseason. The report listed Tarasenko and Blues defenseman Torey Krug.

On Thursday, one day after the report was published, Tarasenko tweeted a photo of him on the water at an undisclosed location without any accompanying text. While the intent of the photo is unclear, hundreds of hockey fans began forming their own theories via Twitter.

Tarasenko has evolved into a force as the St. Louis Blues worked out of a rebuild in the 2010s. He is the franchise’s active leader in goals (252) and among the top ten in Blues history for points (524), hat tricks (5) and numerous other advanced scoring categories. The Blues have made playoffs in nine of their 10 seasons with Tarasenko, winning their first Stanley Cup championship in 2019.

Tarasenko battled through two injury-riddled seasons after the Blues’ Stanley Cup title, limited to just 24 points over 34 games in that stretch. Months after the 2020-21 season ended, the Athletic’s report surfaced that he had requested a trade. Weeks later, the Blues even exposed Tarasenko in the NHL expansion draft for the Seattle Kraken, though he went unclaimed.

The Blues did not find another trade partner last offseason and held on to their proven scorer. Tarasenko followed up the offseason chatter with one of his strongest seasons ever, scoring 34 goals and a career-best 82 points over 75 games. He ended his latest playoff campaign with one hat trick and nine points over 12 playoff games.

Tarasenko’s early-career success led him to an eight-year, $60 million contract in 2015. To date, it’s still the richest contract in Blues history and he’s earning around $7.5 million annually. That contract will expire after the 2022-23 season.

Aside from Seravelli’s report, there is no indication that the Blues are looking to move Tarasenko this offseason. The Russia native has a full no-trade clause as part of his contract, so he would have to agree to waive it in order for any sort of deal.


Adam Wainwright sets up another scavenger hunt at Busch Stadium

Regardless of what the future holds for Tarasenko, the St. Louis Blues have made a worthwhile investment in the Russian forward. The Blues selected Tarasenko with the 16th overall pick of the 2010 NHL draft. Since then, he has represented the Blues in multiple Winter Olympics and rose to national spotlight as the cover athlete for the NHL 17 video game.

Tarasenko and captain Ryan O’Reilly are among four Blues who could become unrestricted free agents next offseason without a new contract. The next round of NHL free agency begins next Wednesday, July 13. David Perron, Nick Leddy and Tyler Bozak are among those who could test free agency without a deal in the upcoming days.

To prepare for next week, the Blues traded another pending UFA, goaltender Ville Husso, to the Detroit Red Wings on Friday for a third-round pick in the NHL Draft.

Five Things That Happened On July 10 In Soap History