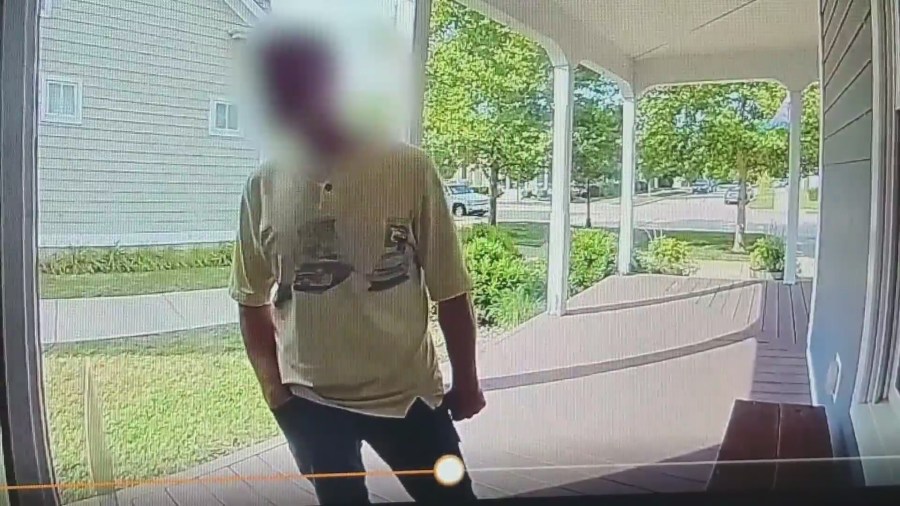 ST. CHARLES, Mo. — A frightening case of political rage came to the front porch of a candidate running for State Representative in St. Charles.

The doorbell video shows a 56-year-old man from St. Charles walking up to the front door of Buddy Hardin, a Republican running for the 106th District seat, shortly before 5:30 p.m. Saturday.

Hardin was not at home but the video shows his wife coming to the door. The man was holding one of 7,000 campaign mailers Hardin had sent out to voters in his district. The mailer had been defaced with profanity.

The mailers note that Hardin is a “Pro-Life, Pro-Police, Pro-Trump,” conservative. In the video, the man was yelling vulgarities at Hardin’s wife, saying he hopes Hardin gets shot.

“Tell him to leave his ‘Pro-Trump’ (expletive) on his own (expletive) porch. Him and Trump, he’s a treasonist… (expletive ) Republicans, (expletive) him, and (expletive) your husband. “I hope he gets shot by a kid with an AR…,” the man said as the video ends.

According to the police report, Hardin’s wife told police the man said he hoped that she and her grandchildren get shot, too.

The man was arrested and issued a summons for peace disturbance.

“All I put (on the mailer) was “Pro-Trump” not even policies about Trump,” said Hardin. “That was enough to make him think he should walk out of his house, get into his car, drive three miles …  it’s a series of decisions that he made that all led to this not-good situation because my wife was in fear at that point. When I saw (the video) I was in fear, too.”

“I think in a lot of ways the bar has been lowered so more people now feel emboldened,” said Dr. Jameca Woody Cooper, a psychology professor and Program Director – Applied Educational Psychology and School Psychology at Webster University.

She said voters follow the lead of their politicians. The turmoil of the past few years may have added to the snowball effect.

“Everything that went on with the election, the pandemic and the uncertainty of it, social justice issues, maybe that has really pushed people over the edge in ways that we don’t recognize and understand,” said Cooper. “We have to hold our local, regional, and national politicians to a standard. If we want it to go back to people being comfortable and safe to freely express their views, we’ll have to get to that because right now it isn’t really safe to express your views … we do have to do a better job, all of us.”

Hardin said that even though his wife is shaken up, the incident has solidified their resolve to win the race.

“How do we improve this discourse? That’s one of the reasons I’m running,” said Hardin. “Stand up, don’t quit. We can all make this a better state. We’re not going to solve the problems this state has if we don’t communicate.”

The suspect is due in court on August 26.

Five Things That Happened On July 14 In Soap History