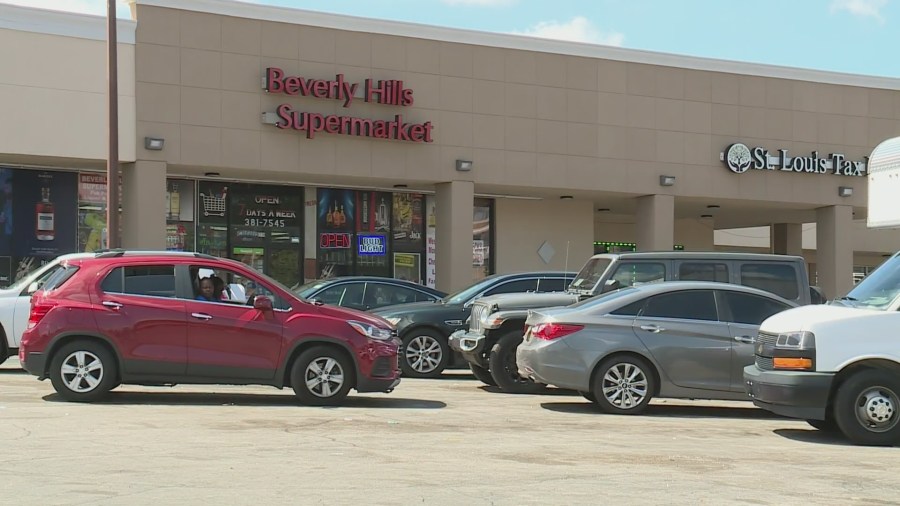 ST. LOUIS COUNTY, Mo. – Police released a new video that shows the moments a gunman opened fire in a supermarket in north county.

Two people have been charged in connection to the shooting that left one man dead. The video showed a mother and her toddler running from the gunfire at Beverly Hills Supermarket on Natural Bridge.

“It appears glass is breaking over her as she’s running to get to her mom in the parking lot,” said Major Rob Martin with North County Police Cooperative. “I do not think Hollywood could script something like that happened.”

Police said a dozen people were inside the store when a fight broke out between two men while a third man blocked the front door.

“That call indicated there was an active shooting going on inside the store with several individuals shot,” Martin said.

They said the shooting happened quickly and officers got to the supermarket in one minute.

“When you get that hot call an active shooter, that officer is ready to go. Going over what they will do, more alert, risk a lot higher in this situation,” Martin said. “People were running out of the store as our officers were running in, so they certainly displayed some bravery yesterday going into this active situation.”

Police said the victim Kardaye Moore was shot several times. He was rushed to the hospital, where he later died. Police are investigating to see if the shooter, Warren Smith Jr., and the victim knew each other. They said the second suspect Marcel Payne was shot in both hands.

“This goes to show you about the violence, it’s affecting us all,” Martin said. “An isolated incident that they wrapped up in their stuff.”

Police said no one else was seriously hurt but it was a scary situation for the people inside the store.

“I come to the store every day for something like this to happen. It’s always shocking,” said Michael Wright.

One shot and killed in Granite City, Illinois