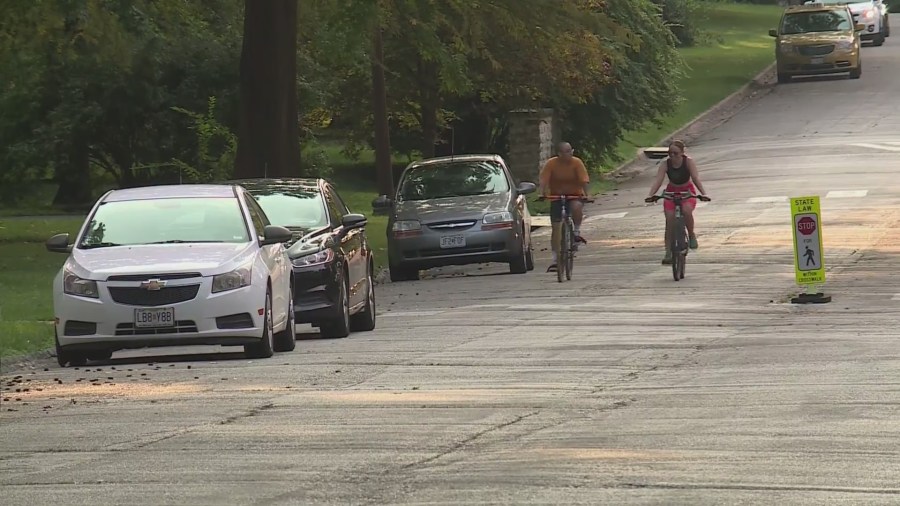 ST. LOUIS – A male bicyclist was pronounced dead Tuesday at a local hospital after getting hit by a car in the Tower Grove East neighborhood.

Police arrived on the scene around 12:40 p.m. in South Grand between Halliday and Magnolia avenues. Police said a man was killed after the driver of a white car hit him while on his bike.

The driver of the white vehicle fled the scene. Police have not located the vehicle.

“It looked like the entire street was taped off. As I approached, I could see a bicycle off in the distance,” said Brandon Cox, a cyclist.

The accident caused a neighboring charter school, Momentum Academy to be put on lockdown out of safety for the kids.


Top Story: ‘Your horror is over’ – Officer reacts to dog fighting bust

“We raised the blinds down, so the kids won’t see nothing that was graphic or what not. We kind of just waited,” said Daniel Ross, Momentum Academy custodian.

It’s unclear what led up to the accident, but residents said speeding is rampant in South Grand which is near Tower Grove Park.

“It makes me a little bit nervous, especially because I walk a lot on this street with my dog,” said April Smith, Tower Grove resident. “There’s been a lot of issues with crazy driving happening on South Grand here.”

Liz Kramer, chair of the St. Louis City Community Mobility Committee said she lives near the scene and is also a biker.

“The level of recklessness that I see of people driving through the bike lane, swerving around cars, going straight through red lights makes me afraid for my life,” Kramer said.

The city has plans to create a safer, separate path for cyclists and drivers. Kramer said she hopes to see changes in South Grand.

“We would really like to see more designs like what’s going to be going in on Tower Grove Avenue where the bike lane is going to be completely separate from the parking lane and the driving lane,” said Kramer.

Kramer said the goal is to have zero traffic deaths.

“There are many places in the Midwest that have moved in that direction and I would like to see us do that,” said Kramer.

“Throughout the COVID-19 pandemic, cities across the country have seen a spike in traffic violence, and today’s tragic hit-and-run on South Grand is a reminder that St. Louis is no exception. City departments continue to review potential solutions to make our streets safer no matter how St. Louisans choose to get around.”

No further details have been released. FOX 2 will give updates as more information becomes available.