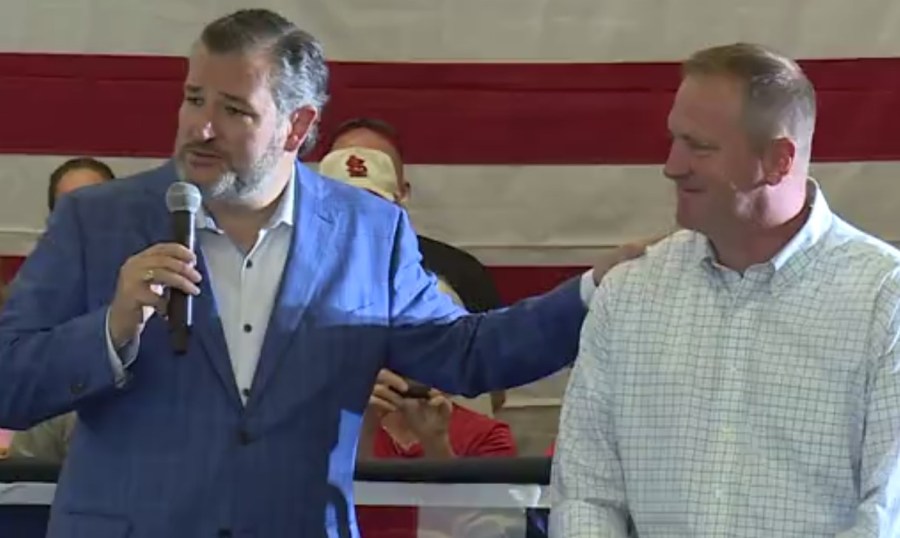 Cruz joined a roomful of Schmitt supporters at Piazza Messina. Schmitt is one of 21 candidates running for the Republican nomination of a soon-to-open Missouri U.S. Senate seat. Voters will select a Republican and Democrat nominee to run for the seat in the Missouri primary election on Aug. 2.

“I’m supporting Eric Schmitt because he has been standing up and fighting for the men and women of Missouri over and over and over,” Cruz said.

“I gotta tell ya, I’m looking forward, in January to walking along the hallways of the United States capitol alongside Eric. We’re going to bump into a little man carrying a screwdriver coming to change the sign on Nancy Pelosi’s door,” he said.

As the crowd erupted throughout the rally. protestors also made their voices heard.

Saturday’s rally was a glimpse of how important the open senate seat will be for the state of Missouri. The seat opens with Republican U.S. Sen. Roy Blunt set to retire at the end of his term.

“This Missouri Senate race matters. The eyes of the country are on the state of Missouri. I have a simple philosophy during primaries. I support the most conservative candidate that can win,” Cruz said.

Schmitt sounded off on the other candidates, reminding supporters that it was former President Trump who said he’s not endorsing Vicki Hartzler.

As for Eric Greitens?

“The former governor who quit on the state, who will lose the seat, or are you going to choose the proven fighter?” Schmitt said as the crowd roared.

Cruz said Schmitt is the type of conservative the party needs.

“I’m here because when it comes to taking on Joe Biden and Kamala Harris, I’m confident that Eric will stand and lead the fight for the men and women of Missouri,” he said.

“You look around in the senate, and the people who are standing up for American people, Ted Cruz is in the middle of that ring, and I think we need reinforcements right now in Washington D.C. to save America and it’d be a privilege to join Ted Cruz in that fight,” Schmitt said.

Amtrak trains delayed in Mo. due to heat precautions