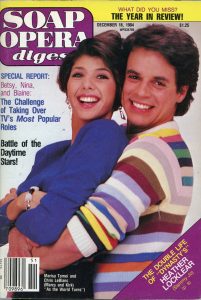 THE NOT-SO-DISCREET CHARM OF CHRIS LEBLANC

(Kirk McColl, “As The World Turns”)

Chris LeBlanc answers his doorbell clad in old jeans, a cut-off yellow sweatshirt and horn rim glasses, looking nothing like his playboy-of-half-the-western-world character on “As The World Turns,” Kirk McColl. His apartment is a cozy upper East Side duplex with dusty rose walls, comfortable new furniture, and lovely artwork. Chris is in the midst of a major redecoration, with a little help from his ATWT co-star and close friend, Kim Ulrich.

He ushers me to a small table and puts out a breakfast repast of tea and coffee cake, cracking, “I feel like a real grown-up,” as he carefully arranges the silverware. A beautiful vase filled with red carnations graces the table and I compliment him on them. “I bought them because you were coming over,” he admits a little shyly, and then flashes a disarming grin. No doubt about it — Chris LeBlanc is irresistibly charming.

Part of the young actor’s warmth and charm can easily be traced to his Cajun roots. “Both sides of my family are old New Orleans,” Chris explains, “but I was an army brat until my family moved to Convent, Louisiana, when I was in the sixth grade.” He proudly points to a small framed etching of an exquisite little plantation and says, “That was my family home.” Growing up with six brothers and two sisters deep in the heart of Cajun plantation country, right on the banks of the Mississippi, gave Chris a childhood straight out of a storybook. “Living on the river, you can go craw fishing in the front yard, in the lakes behind the levee,” he reminisces between sips of coffee. “It is a real Huckleberry Finn kind of thing.”

Most of Chris’s free time disappeared when he decided to attend a private Catholic high school in New Orleans, which meant an hour-and-a-half daily commute each way. Between the traveling and working part time in the school’s office to help pay for his tuition, he had little time for extra-curricular activities. But things changed when he graduated high school and entered Tulane University. At college, Chris discovered a myriad of new interests like sports, music and medicine. “I remember not knowing exactly what I wanted to do, and then I got interested in medicine,” he states. “I became pre-med because it encompassed so many things. I worked in a hospital, the Ochsner Clinic for six years, from my senior year in high school all through college and for a year after that, in everything from physical therapy to chemistry labs. I really loved working there.”

Chris graduated from college determined to become a doctor. However, that magical thing called fate intervened one day while Chris was clocking a few laps in the Tulane pool after work. “I was in the locker room afterwards, and this little man comes in waving his hands, saying, ‘You model a lot?’” It turned out that he was a highly respected photographer and was very interested in shooting a session with Chris. “It took me three months to get up enough nerve to call the New Orleans modeling agency he recommended to me,” Chris remembers with a rueful smile, resting his long legs on a wrought iron stairway railing. “The day I finally did it, I’d worked a 48-hour shift at the hospital. I called up the agent and she said, ‘Where have you been? We’ve been waiting for you to call. Come in right now.’ I walked in wearing a bloodstained lab coat looking like hell after the 48-hour shift, and to this day, she admits her first thoughts were, ‘WHY was the guy sent to me?!’”

All it took was a little sleep and a change of clothes and Chris was booking modeling jobs right and left, which led to commercials and his big break — being cast as one of three leads in the PBS five episode series, “Edit Point.” “Doing ‘Edit Point’ was probably the most traumatic part of my life,” he slowly reveals. “Learning the difference between acting for fun and acting for money was incredible. The lesson I learned was that it’s a very serious profession, and it’s a lot more difficult than people think. I was very ignorant about how much hard work it is and I paid for it a lot during the shooting. It was a baptism by fire.”

However, Chris became extremely close to his two co-stars, Mark Nichols and Arianne Batiste, and when he discovered Mark was planning to make the big move to New York, Chris decided to join him. The two young actors got an apartment together and Chris landed a support job as a busboy at the plush Helmsley Palace Hotel. The first few months were tough, to say the least. Not only was LeBlanc shifting between busboy and audition duties at a frenetic pace, but suddenly he learned his mother was very sick. “My mother was diagnosed as having cancer back home in New Orleans,” he shares. “It was very hard because I wanted to go home and be with her. But she had six other kids around and the hospital was saying ‘Enough already with the visitors!’ She’s fine now, thank God.”

Shortly after that, things improved on the career front for Chris, too. He began landing commercials, and has particularly fond memories of his debut spot. “I got my first job here as a Donny Osmond lookalike,” he chortles. “It was the first time I was actually paid for being accused of looking like him — that had gone on since high school!” The Chris found himself screen testing for both the TV series “Fame” and ATWT. “I was still a busboy when they offered me the role of Kirk. Coincidentally, the day I got it, I was also finally offered a waiter’s job at the Palace. To this day, I can walk in there and they’ll say, ‘Why’d you turn down the waiter’s job?’”

From the beginning, Chris was made to feel right at home on ATWT. Many of his castmates have become dear friends, particularly Kim and her husband, Robert. “She’s fabulous, I don’t know where I’d be without her of Robert. And I love Breck (Jamison, who plays Jay). I have to say that because he told me to!” Chris laughs. Chris also counts Tracy Kolis (Juliette) as a close friend he can confide in.

Chris acknowledges that his character, Kirk, has changed a lot over the past months. “He’s gotten extremely stupid,” Chris insists. “He’s just not being very empathetic, he’s not reading people very well. He’s really wrapped up in himself. It’s got a lot to do with his father’s death and his obsession with Frannie (Terri VandenBosch). I think it’s going to make him do some very strange things.”

For Chris, two of the greatest benefits of him being on ATWT are the training it offers him coupled with a very healthy paycheck. “I can take my classes and not have to work as a busboy or in a lab. That’s one thing I’m very grateful for,” he declares fervently. “To be able to do this and be paid for it is wonderful. As an actor, it also gives you an incredible opportunity to work with people who’ve been in the business for years. You get to watch, you get to learn and practice every day. You’re doing it five days a week, so you get a second chance. If you flub it one day, you’re not doomed for it.”

However, there are drawbacks to being a soap star. It’s a demanding job, and the hours can be long and arduous. Chris has found that the major problem with doing the show is the strain it puts on friendships and relationships. “When you’re on TV,” he explains carefully, “there are changes you go through. You’re looking for the fans to recognize you, you like that. But you can’t lose yourself in that, because in the end, it’s fluff, it’s very insubstantial.”

LeBlanc admits that during the first flush of his success, he came perilously close to alienating some of his nearest and dearest by becoming too wrapped up in the “star” angle of his career. “You start taking people and things for granted,” he sighs. “Unfortunately, sometimes you don’t realize how precious they are until they’re gone. Luckily, my friends put me through hell because they were concerned. They came up to me and said, ‘Listen, we’re not going to take this anymore. Wake up, or we walk.’” He chuckles, then absent-mindedly rocks his chair back and forth as he ponders the dilemma. “I’ve been going out with a girl from New Orleans for three years, and we’ve actually seen each other maybe six months out of that. It’s very hard to define a relationship like that.”

Chris readily admits that his life has changed since becoming a soap opera heartthrob. “Hopefully I’ve changed for the better over the last few years. I’ve become much more inward-turned because as an actor you go through your own thought processes, you search for things in yourself you can bring to a role. I’ve always been a very people-oriented person; that runs in my family. My father would kiss, hug, and have drinks in your hand before you could say, ‘Hey, wait a minute, I’m just the paperboy, you don’t know me!’” Chris gets up to pour coffee into his empty mug and reflects some more on the dangers of show-biz success at an early age. “Your looks become much more important to you all of a sudden because you’re on TV. You’re conscious of an image and the product you’re selling — yourself. I’ve found that with being up here in New York and being involved with developing my product, which is me, I’ve really got to watch my ego.”

The phone rings. LeBlanc’s press agent wants to know if he’s interested in making a personal appearance in upstate New York. From Chris’s enthusiastically affirmative response, it’s obvious he has as much fun meeting the fans as they have meeting him. As soon as the details are settled, he hangs up and quickly returns to the table. “I’m going for everything,” he states with a mischievous smile. “If you’re nutty enough to give up everything else and go into the profession, you might as well shoot for the works. I’d like to do a feature film, I feel that’s the genre I’m most prepared for. I’d love to do musicals. I’d like to do something while still doing ATWT. My goal is to become a very good actor, the best one I can be, anyway. And I think I can be good. I’ve got a lot of work to do, but I think I have potential.”

Suddenly, Chris breaks into laughter and flashes that irresistibly handsome Cajun grin one more time. “You know, technically, I’m still on a leave of absence from the hospital,” he informs me. “I call them to check in and say, ‘Hey, guys, do you still have a place for me? We have a new executive producer, I don’t know what’s going on — just making sure I still have my lab equipment!’”

Maybe so. But this is one person who says the Ochsner Clinic had better not hold its breath waiting for Chris LeBlanc to return to the lab.

This interview originally appeared in the December 18, 1984 issue of Soap Opera Digest.

Catching Up With Murray Bartlett