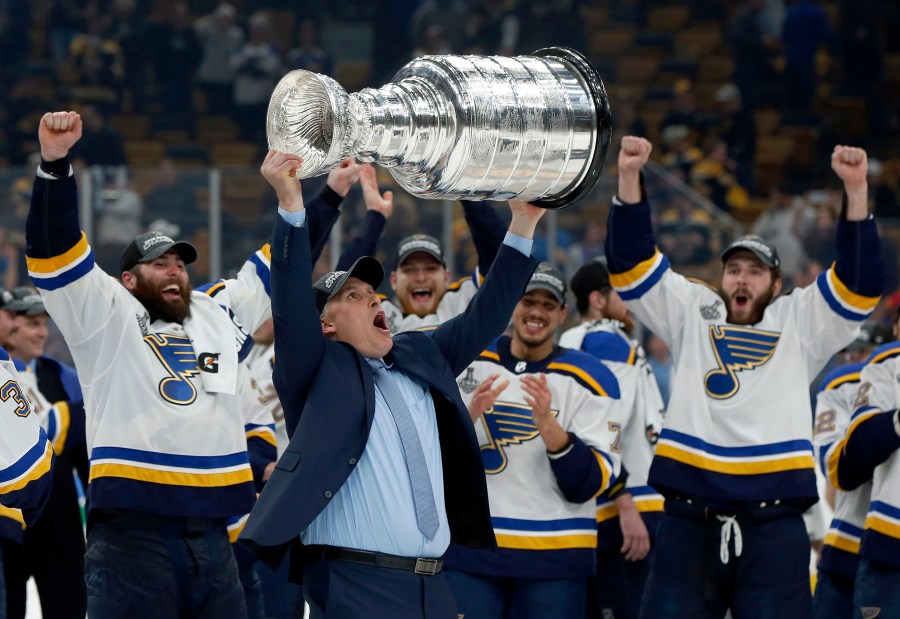 ST. LOUIS – Three years have passed since the St. Louis Blues hoisted the Stanley Cup and capped off one of the most improbable success stories in recent hockey history.

Saturday marks the three-year anniversary of the St. Louis Blues clinching their first Stanley Cup championship, ending the NHL’s longest wait ever – 52 years – for a first-time champion. The Blues stretched the season to league’s last possible day. It ended with a 4-1 victory in a winner-take-all Game 7 on June 12, 2019, against the Boston Bruins.

Here’s a look back at some of the season-defining moments from the 2018-19 St. Louis Blues and their Stanley Cup title run:

Early-season woes hit the Blues harder than most teams. After a 7-9-3 start, nearly one-quarter into the season, the Blues parted ways with Mike Yeo as head coach and promoted Craig Berube to interim head coach.

Berube joined the Blues as an assistant coach in 2017 and brought some playoff experience from when he coached the Flyers. He would help lead the Blues to a third-place division finish and accomplished a rare feat by coaching to a Stanley Cup championship under an interim tag. Berube is now four seasons into his Blues coaching career, having made playoffs all four times under his reign.

The flip to the new calendar year marked an underdog story in the making as Jordan Binnington made his first NHL start on January 7, 2019. Binnington, who spent several years in the minors and had only three games of NHL experience in relief prior to then, got the call for first NHL start against the Philadelphia Flyers. The rookie netminder blocked 25 shots and cruised to a shutout victory, the first of 24 wins and 5 shutouts he would pick up in the regular season.

Binnington emerged as the go-to goalie and eventually placed second for the Calder Trophy, the award for NHL’s top rookie. The night before, multiple players visited Jacks NYB, a private bar in south Philadelphia, to watch the Eagles/Bears NFL playoff game. A DJ played Laura Branigan’s ‘Gloria’ during a commercial break, and it left a lasting impression on the players. “Gloria” became the stadium anthem after victories in the regular season and playoffs.

The Blues rallied to a 5-1 road victory over the Anaheim Ducks in their final game before All-Star break. Little did hockey fans realize then the Blues would catch fire and not lose another game for nearly a whole month. The Blues won a franchise-best 11 straight games to enter themselves back into the Western Conference playoff picture.

The team’s surge included a stunning third period comeback over the Florida Panthers, a one-goal, overtime victory against NHL point-leading Tampa Bay Lightning and wins in back-to-back days against division rival Nashville Predators. The record-breaking win came February 19, 2019 at home against the Toronto Maple Leafs when the Blues spoiled a late lead, but sent fans home happy with a game-winner only 34 seconds into overtime.

Blues superfan Laila Anderson won the hearts of hockey fans as she cheered on the Blues during their Stanley Cup title run. Laila was an 11-year-old fan with hemophagocytic lymphohistiocytosis, a rare immune disorder that required her to undergo chemotherapy and a bone marrow transplant in January 2019.

While fighting her illness, Laila connected with the Blues and built genuine friendships with several players, including Colton Parayko. Laila would later be surprised by the news that she would be heading to Boston to watch Game 7 in person. Following the Stanley Cup win, the Blues let her have a touching moment with the Stanley Cup and eventually gifted her a ring.

Then-new acquisition Ryan O’Reilly proved to be a consistent force, even during the Blues slow season start. O’Reilly was the lone representative for the Blues in the 2019 NHL All-Star Game, entering the All-Star break with 50 points in 49 games. O’Reilly, who became the Blues captain two years later, would finish the regular season with perfect attendance, 28 goals and a team-best 77 points.

The center elevated his gameplay to award-winning heights. O’Reilly capped off a remarkable playoff run with points in six straight games and finished the series four-game goal streak, earning the Conn Smythe Trophy as the league’s top playoff performer. Later on, O’Reilly would be honored with Selke Trophy, awarded to the league’s top defensive forward, largely due to his success in faceoffs and special teams.

After battling injuries earlier in the season, one of the Blues’ longest-tenured skaters came up clutch in the playoffs. Jaden Schwartz picked up several huge goals in the Blues’ first-round playoff series with the Winnipeg Jets, stunning Winnipeg with a game-winning goal with less than 15 seconds remaining in Game 5. That gave the Blues a series lead, and he would help the Blues advance to the next series with a hat trick.

Schwartz would stay hot in the upcoming weeks, finishing his playoff run with 12 goals and 20 points and adding another playoff hat trick in the Western Conference Finals against the San Jose Sharks. He capped a historic surge only one goal short of Brett Hull’s single-playoff record.

A winner-take-all situation between two division foes led to one of the most iconic goals in St. Louis Blues history. The Blues hosted the Dallas Stars for Game 7 of the second-round, dominating in puck possession and scoring chances through three periods. The contest ultimately require two overtimes to produce a winner.

The Western Conference Finals started in San Jose, where the Blues salvaged a series split upon return to St. Louis. In Game 3, the Sharks struck first with a pair of goals in the opening period. The Blues answered with four second-period goals, only for the Sharks to tie the game in the third period and force overtime.

Luck did not side with the Blues, as Sharks defenseman Erik Karlsson snuck a puck past Binnington nearly five minutes into overtime. What stood as the game-winning goal didn’t come without controversy. A hand pass from Sharks forward Timo Meier apparently factored into the goal, but the play was ultimately deemed non-reviewable. The Blues fell behind 2-1 in the series, but the hand pass proved to be motivation for the Blues, who rattled off three straight wins to secure their first trip to the Stanley Cup Final in nearly half a decade.

After dropping the first game of the Stanley Cup Final, the Blues battled for better fortunes in Game 2. The Bruins took an early lead twice, but tallies from Robert Bortuzzo and Vladimir Tarasenko evened the score after the first period. The next two periods moved along without a goal on either side, but the Blues appeared to be generating more chances, outshooting and outhitting the Bruins.

As crews prepared the ice for a 20-minute overtime, Carl Gunnarsson told head coach Craig Berube he needed just “one more chance.” The conversation reportedly happened while standing side-by-side at urinals in the restroom of the team’s locker room, shortly after the defenseman sent a booming shot off a goal post in the final minutes of regulation. Only 3:51 into overtime, Gunnarsson stuck to his word and rifled a one-timer past Bruins goalie Tuukka Rask. The goal secured a 3-2 comeback win, the Blues first victory in a Stanley Cup Final game in franchise history.

Believe it or not, the St. Louis Blues had a chance to win their first Stanley Cup title on home ice. After winning Games 2, 4 and 5, the Blues returned to Enterprise Center for Game 6, but lost 5-1. The Blues left St. Louis with unfinished business and two distinct outcomes at stake: A chance to finally lift the Stanley Cup or a continuation of the NHL’s longest drought without one.

Game 7 started with scoring chances favoring the Bruins, but the Blues prevailed. Ryan O’Reilly, on the heels of a Conn Smythe Trophy, redirected a shot from Jay Bouwmeester for the first goal nearly 17 minutes into the game. In the final seconds of the first period, then-captain Alex Pietrangelo controlled a pass from Jaden Schwartz and beat Bruins goaltender Tuukka Rask with a backhand shot.

The adrenaline built up to a season-high, as the Blues brought a 2-0 lead into the third period and showed no signs of slowing down. Brayden Schenn and Massachusetts native Zach Sanford added to the fun with goals in the final half of the period. The Bruins answered with one goal in the closing minutes, but it came too little, too late.

Helmets, gloves and hockey sticks flew onto the ice in jubilation as the last buzzer finalized a 4-1 victory and the first-ever Stanley Cup championship for the St. Louis Blues. The team’s long-awaited celebration echoed through the TD Garden, a moment best described by the historic call from Blues radio broadcaster Chris Kerber:

“Get up, St. Louis! Get on your feet! Raise them high! Five seconds to go, and the time winds down! They did it! It’s over! The game is over! The series is over! The wait is over! And the St Louis Blues are the Stanley Cup champions for the first time in franchise history!”

How to Find the Best Delta 8 Gummies for Pain

How to Find the Best CBD Cream for Foot Pain