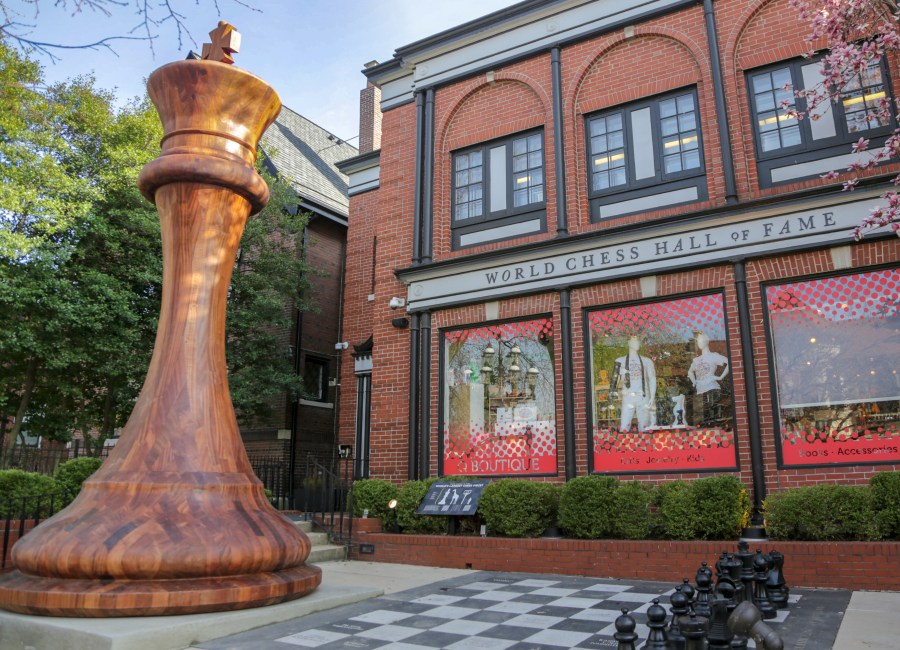 ST. LOUIS – The Guinness World Record for the largest chess piece currently belongs to St. Louis, but there appears to be a checkmate with another challenger.

A 20-foot tall chess piece stands in front of the World Chess Hall of Fame in the Central West End neighborhood of St. Louis. The giant king piece has held its claim to fame since April 2018. It’s made of Sapele African Hardwood and is 53 times larger than the standard Champion Staunton king piece.

“The iconic chess piece not only serves as a beacon for the Saint Louis Chess Campus, but also a regional and national landmark that exemplifies Saint Louis’ impact on the sport and art of American chess,” says the World Chess Hall of Fame on its website.

The French Chess Federation, known natively as Fédération Française des Échecs, is now claiming the country has a larger chess piece. The Sautron Chess Club says it assembled a piece measuring at 6.3 meters tall, or 20.7 feet, ahead of an international chess week in July.

With St. Louis’ chess piece measuring at 6.1 meters, the Sautron Chess Club unofficially broke a years-long record and could be on the cusp of securing the official world title. A spokesperson with Guinness World Records tells FOX2 that an organization in France has submitted an application for the title and a records management team is waiting for evidence to review.

“Within our application process, we provide the applicant with guidelines that are specific to that record category and must be adhered to, to qualify,” said Kylie Galloway, a public relations executive for Guinness World Records North America. “These guidelines also detail the evidence that must be submitted.”

The standard application review process could take up to 15 weeks after submission. Once received and reviewed, the Guinness World Records Management Team will confirm whether or not the record attempt was successful.

The World Chess Hall of Fame tells FOX2 that organizers are aware of the attempt to break St. Louis’ world record, but they welcome the competition.

“I think [the attempt] is kind of what chess is about,” said Courtney Suthoff with the World Chess Hall of Fame. “It’s very competitive and always about the next move. It’s right on par with the things that make chess interesting.”

Suthoff hopes the new-record attempt raises more awareness about chess and gets people from more countries and cultures involved in the game. The World Chess Hall of Fame has not yet decided about the future of its current title-holding chess piece if the record is broken.

“The chess piece is something that we love and has been an iconic part of the [Central] West End,” said Suthoff. “The world’s record was fantastic to hold for as long as we have. [Future plans] would probably have to be part of a bigger strategic reason other than trying to beat the world record.”

When it broke the previous record in 2018, the current chess piece marked the 10-year anniversary of the Saint Louis Chess Club and a decade of hosting the U.S. and U.S. Women’s Chess Championships in the Gateway City, per Guinness World Records.

Dillard’s slows down in Q2 as women buy less apparel