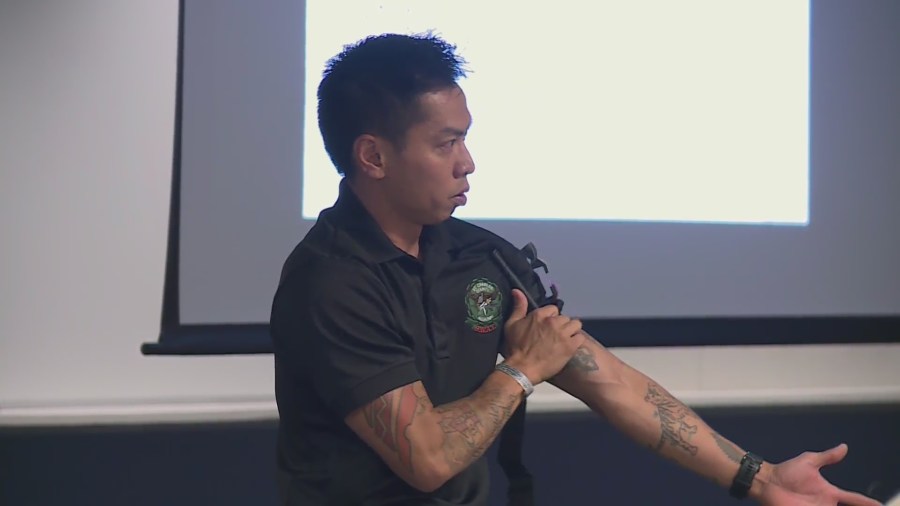 ST. CHARLES COUNTY, Mo. – The St. Charles County office workers attended a training session Thursday, to be prepared in the event of a mass shooting.

It’s the first step toward defending ourselves and limiting damage from attackers.

The training is a response to mass shootings and assaults that happened in July. There was the fourth of July massacre near Chicago, Sunday’s mass shooting at an Indianapolis mall, and last weekend’s knife-point robberies at St. Charles gas stations.

“It’s reality with what just happened around here (at the gas stations),” said Karen Jeter, who works in the Record of Deeds office. “It can happen. So, yeah, I think it’s better to prepare. It’s scary to think about, but you have more power if you know more.”

“Everything helps,” said St. Charles County Councilman, Joe Cronin. “It’s all a resource you’ll rely on should you need it in an emergency like that. It’s on everybody’s mind.”

Cronin was among the attendees who were learning how to use a tourniquet, how to barricade a door, and how to pack a wound. Police said the training can be applied everywhere.

“It’s scary today. I think you can take this training and not just apply to the workplace,” said Lt. Ryan Streck from St. Charles County Police Department. “You can take it home with you. You can take it to the mall with you. It allows them to have a plan, and puts more tools in their toolbox to be able to respond to an active threat.”


Trending: Could the Cardinals and Blues pull off blockbusters for Soto, Tkachuk?

“The name of the game is stacking the deck to increase survivability,” said Law. “The stuff we go over is all preventable death … (for) just a regular person, they don’t have to be a paramedic. They don’t have to have this massive training. It’s just thinking of stopping the bleeding a certain way to prevent somebody from dying.”

Streck said the officers at St. Charles County Police Department won’t hesitate to put their life on the line to help victims or to obtain the shooter.

“Without hesitation. You can count it,” said Streck.