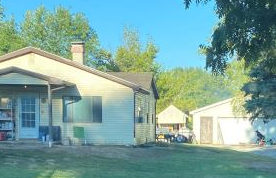 MADISON COUNTY, Ill. – A man is behind bars after authorities shut down a home suspected as the center of illegal drug activity in one small Metro East community.

A search warrant issued Tuesday led to a large amount of drug evidence at a home in the 100 Block of Lenora Street in Cottage Hills, Illinois. The warrant led to the arrest of David Walker, the primary suspect tied to drug activity.

The Madison County Sheriff’s Office says an investigation into the home began after several neighborhood complaints and anonymous tips of drug activity. When authorities arrived, they found an undisclosed amount of evidence.

Prosecutors have charged Walker with two felonies, including unlawful possession with intent to deliver methamphetamine, unlwaful use of property. He is jailed on a $150,000 bond in Madison County.