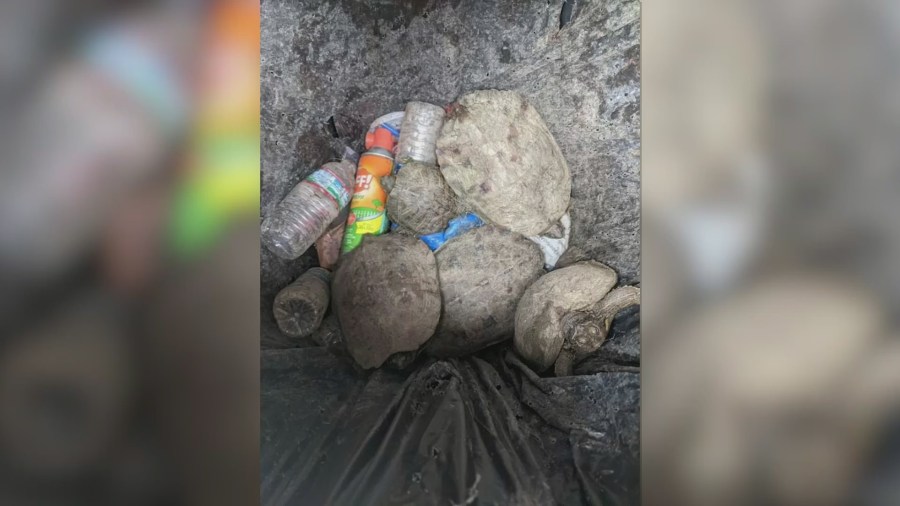 CHESTERFIELD, Mo. – Six turtles are rescued from a Chesterfield park after being thrown out in a nearby trash can.

A few days ago, Molly Brenan, director of programs with the Wildlife Rescue Center, said she got a call from park goers who watched some fishermen take the turtles away from where they were situated at a lake in River’s Edge Park.

“They were walking around the lake and witnessed somebody putting upwards of 15 turtles in a trash can near the lake,” Brenan said. “Why would anybody do this?”

Most of the turtles were wrapped up in fishing line. Some had a fishing hook in them that had to be cleaned out.

“That’s awful,” said park visitor, Mike Thompson. “We actually stopped and helped one get across the road and not get run over.”

Another park vistor expressed their thoughts about the incident.

“I love animals and I can’t imagine anyone doing that,” said park visitor, Rachel Federer. “Animals give so much to the outdoors and us, we should respect nature.”

If the fishermen who threw the turtles in the trash were caught by a conservation officer or the police, legal action would most likely be taken against them.

“It’s a bit infuriating that there are people that are doing these things, but we feel very fortunate that we’re there to help these animals,” Brenan said.

Brenan was able to release the turtles after carefully examining them.

“They were so happy to be home. As soon as you put them on the ground, they were as like full sprinting as a turtle can be to go back into the water,” she said.

Brenan encouraged anyone that sees a turtle in distress or hurt to call a local animal rehabilitation center or the Missouri Department of Conservation to help.