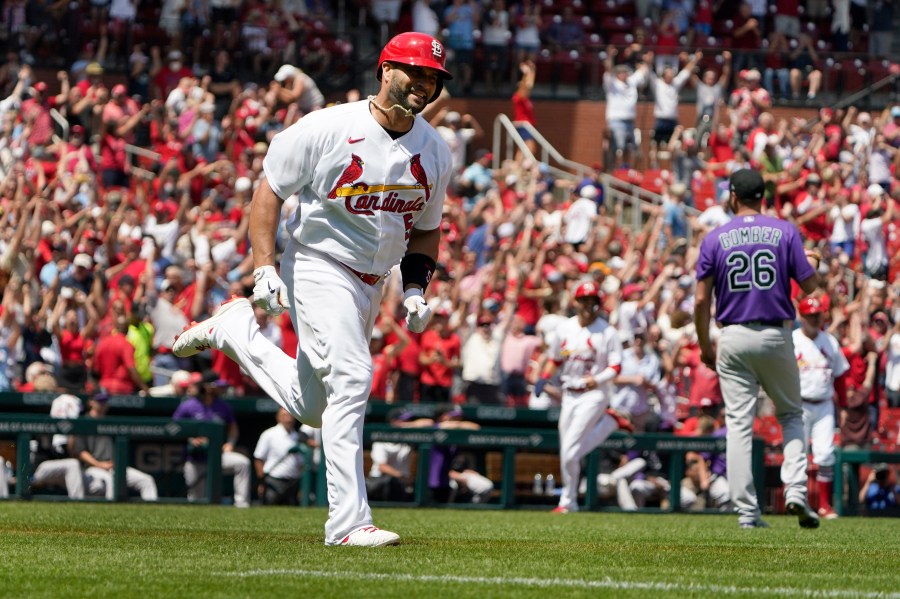 The Rockies lost starting pitcher Antonio Senzatela and right fielder Charlie Blackmon in the second inning to leg injuries. Senzatela crumpled to the ground after attempting to cover first base and Blackmon was removed an inning after beating out an infield single.

The NL Central-leading Cardinals won their fourth in a row and sent Colorado to its fifth straight loss. St. Louis has won 12 of its last 13 home games and has taken 12 straight from the Rockies at Busch Stadium.

Pujols hit his 690th career home run, connecting off Austin Gomber and capping a five-run third that made it 10-0. It was Pujols’ 16th career grand slam — his first as a pinch hitter — and it moved him into a tie with Hank Aaron, Babe Ruth and Dave Kingman for 10th-most slams of all-time.


Will Albert Pujols reach 4th all-time or 700 in HR chase?

Wainwright (10-9) gave up three hits, two of them infield singles. He struck out seven, walked none and retired his final 13 batters.

Génesis Cabrera and Chris Stratton each pitched a scoreless inning of relief to complete the four-hitter.

The Cardinals did not commit an error in any of the six games during the homestand. It was their first errorless homestand of six or more games since Aug. 1-7, 2008. St. Louis went 5-1 in the games against Colorado and Milwaukee.

Cardinals: RHP Miles Mikolas (9-9, 3.44 ERA) will begin a three-game series at Arizona, which will start LHP Tommy Henry (2-1, 4.15 ERA) on Friday night. Mikolas is 1-1 with a 2.55 in four career appearances, including two starts, against the Diamondbacks.

Falling US home prices ‘still nowhere near the bottom:’ economist