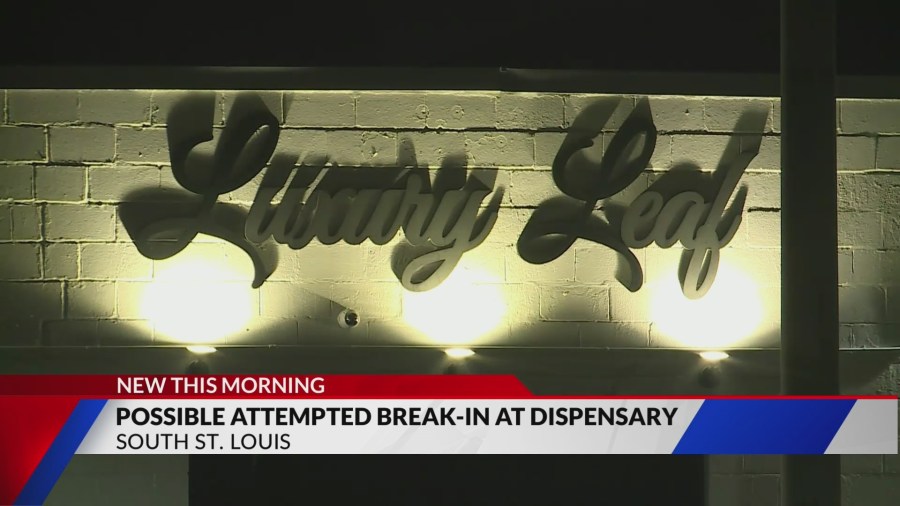 ST. LOUIS – St. Louis Police are looking into a possible break-in at a marijuana dispensary.

Police responded to the Luxury Leaf Marijuana Dispensary on south Vandeventer in south St. Louis around 4:00 a.m. Broken glass and bars on the door that have bent can be seen in front of the building. There was also a call for shots fired at the same address.

This is the latest of several medical marijuana dispensaries that have been hit by thieves. Back on August, 16 there were reports about a car that hit a Cookies dispensary in the Florissant area on New Halls Ferry around 5:15 a.m. No one was there when the officers arrived and that incident is being investigated as a burglary.

Another dispensary was broken into on August 19 in Valley Park. That one happened at 3:15 a.m. at Primo Cannabis on Meramec Station Road. A large rock that had been thrown through the window was discovered at the scene. Products were spilled all over the floor and into the parking lot.

Police are still investigating all of these incidents. No arrests have been made in connection with any of the cases. FOX 2 will update this story with more information as it becomes available.

15 Amazing Places To Visit In The Iceland Highlands (+ Map)