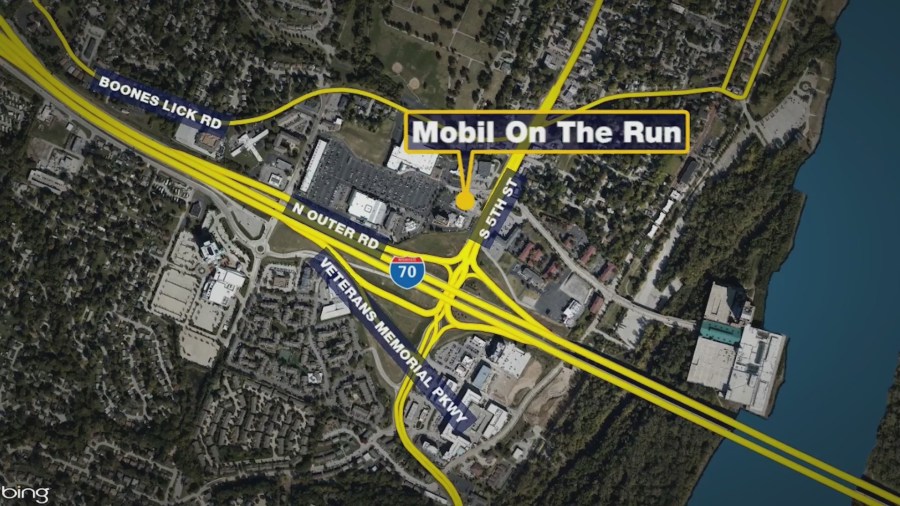 ST. CHARLES, Mo. – Police confirmed on Friday that a crime spree, which ended with a witness shooting and killing a suspect at a QuikTrip in St. Charles over the weekend has started in Maryland Heights.

Investigators said they have not confirmed whether the suspect who was killed was also the carjacker in the initial crime.

Police said a couple stopped at Mobil On The Run convenience store on Riverport Drive in Maryland Heights to adjust a paddle board on the roof of their car. The suspect jumped into the driver’s seat through an open door. Police said the victim tried to pry the suspect’s hands from the steering wheel, but the suspect “elbowed” him and dragged him about 40 feet as he drove away before the victim finally let go, fearing for his life.

According to police, the stolen vehicle was found about 15 hours later, four miles away in St. Charles.

The stolen car showed up during a robbery at another Mobil On The Run on Fifth Street in St. Charles before 3:00 a.m. Saturday. Then, the suspect drove the car to a nearby Phillips 66 station to break in about 15 minutes later (the station was closed).

Police said about five minutes after that, the suspect drove the vehicle to the QuikTrip about a mile and a half away on First Capitol Drive near I-70. A witness at the QuikTrip shot and killed suspect, Lance Bush, 26, of St. Louis, during a knife-point robbery.

Bush held a knife to the throats of clerks at both the QT and Mobil On The Run in St. Charles. Police said he physically dragged both women around the stores. The clerk at On The Run suffered lacerations from the knife. The clerk at the QT was not injured.

Investigators said they are reviewing surveillance video from all of the locations, including the one in Maryland Heights where the carjacking first started about 12:15 p.m. Friday.

“In broad daylight!” said customer Sandra Brown. “I’m so scared now. I mostly stay at home because of stuff like this. Every time, I stop at a gas station or anything I turn my car off, take my keys, and I don’t even carry a regular purse anymore. I carry something that goes over my whole body. (I) lock my doors while I’m pumping gas. I just don’t trust people anymore. It’s so dangerous now.”

A Maryland Heights investigator planned to meet with the carjacking victim Tuesday to confirm whether Bush was the car thief.  St. Charles Police said they hope to complete their investigation by next week so a prosecutor can then decide whether Bush’s killing was justified.