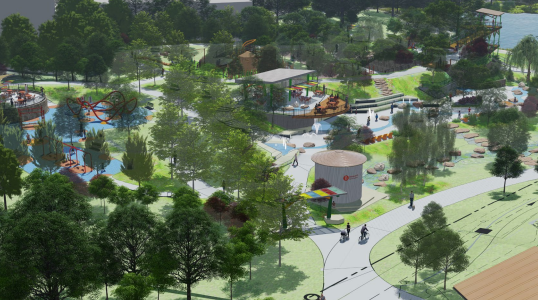 BRENTWOOD, Mo. – A multi-million dollar destination playground is in the works for Brentwood and could open as soon as next year.

Current plans call for sensory and ADA-friendly playground elements, a net climber, swings and a new walking paths among other elements. Early proposals also called for a rock climbing wall and zipline features.

“There isn’t another like this in St. Louis County, this is the only one,” said Dimmit. “Our anticipation is every week, we expect people from all over St. Louis to come here. It’s going to be a wonderful facility, and it’s going to be easily accessible to so many people.”

The playground is part of a $90 million infrastructure plan through the Brentwood Bound initiative to redevelop the Deer Creek area and mitigate flooding. Currently unnamed, the playground is a core part of the new 2.5-acre Brentwood Park, in the works south of Manchester Road.

Dimmit hopes the playground will be finished and open to the public by the end of 2023. City officials are keeping track of new developments with an online timeline and say construction will begin after the design is completed and permits are received. A YouTube video shows renderings of the concept.