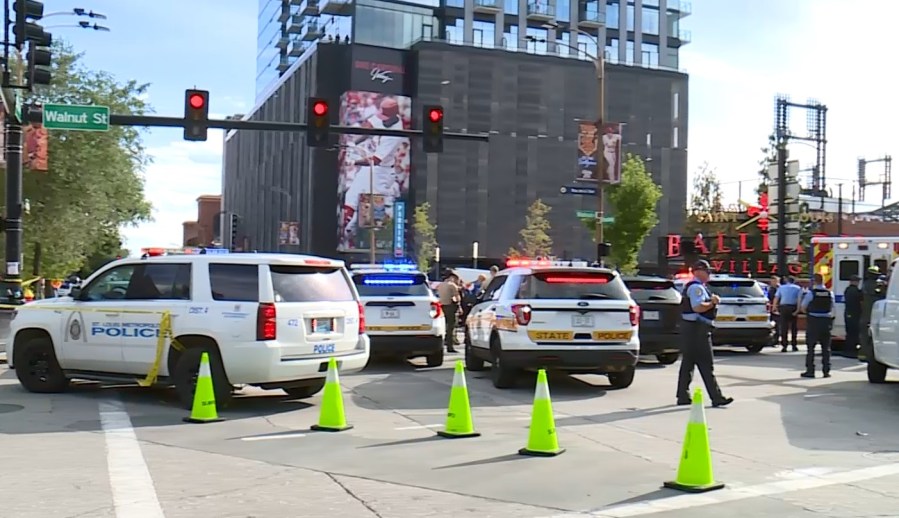 ST. LOUIS – Police say a group carjacked a pizza delivery driver Friday afternoon before his vehicle was involved in a brief police chase and a crash in Downtown St. Louis.

The victim was carjacked around 4:15 p.m. Friday in the 3200 block of Chippewa Street near the Dutchtown neighborhood. After that, police spotted the stolen vehicle just across the Missouri-Illinois state line in East St. Louis.

The driver took off and led police on a brief pursuit, which ended when the driver crashed into a golf cart and a parked vehicle near Broadway and Walnut Street, a short distance away from Ballpark Village, just before 5 p.m. Friday.

Investigators say, during the carjacking, the victim was approached while he was delivering a pizza and one suspect tried to enter the victim’s vehicle. The suspect told the victim, a 35-year-old man, to step away from his vehicle before another suspect held him at gunpoint. After that, the suspects took off in the victim’s vehicle and another vehicle they had driven to the scene.

Investigators with the St. Louis Metropolitan Police Department later sent over information to the Illinois State Police about the stolen vehicle wanted from the incident. An Illinois trooper noticed a vehicle that matched that description. The trooper tried to pull over the vehicle at 18th and Division streets in East St. Louis before the driver took off, leading to a brief chase.

The chase ended in downtown St. Louis. Investigators said the suspect driver struck a golf cart on the sidewalk and a parked car. One man was inside the golf cart during the collision, and he was rushed to a hospital with undisclosed injuries.

Authorities arrested five suspects in the investigation, including three juveniles. The suspects range from 16 to 20 years old.

A pistol was also recovered from the vehicle. The St. Louis Metropolitan Police Department is investigating the crash and carjacking leading up to the crash.