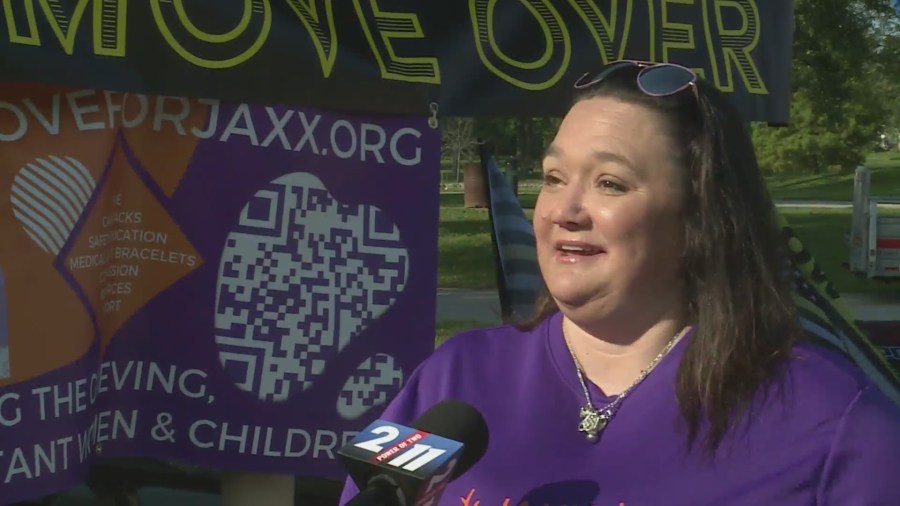 Kaitlyn Anderson died Nov. 20, along with her unborn baby Jaxx. A driver ran her over as she worked for MoDOT in south St. Louis County. James Brooks also died from the collision, while MoDOT worker Mike Brown was also struck and continues recovering from injuries he says he will fight through for the rest of his life.

“I pray that this is going to get a lot of drivers’ attention,“ Chuck McGinnis said as he stood in front of a coffin. He drove overnight, all the way from Indianapolis last night pulling the message behind him – “Slow Down – Move Over” – stamped on a coffin.

“It’s a very hard message to get through to somebody,” McGinnis said, “They’re always on their phones, texting. Something is always distracting them.”

McGinnis knows first-hand as he added, “I’ve been hit three times. Never thought it would even happen to me, but it did, twice by a semi and once by a car. Luckily, I’ve had somebody looking over my shoulder and I’m still here.”

He drove to St. Louis overnight, to support Musskopf, whose daughter is no longer here.

“It’s overwhelming and it means a lot to me because he gets it,” Musskopf said. “He wants to go home to his family just like I wanted Kaitlyn to come home to mine.”

Musskopf’s foundation, “Kait’s Love for Jaxx” held a charity benefit Saturday. It included a toy drive because Kaitlyn loved Christmas. They will provide presents for three families, and the remaining toys will go to the crisis nursery.

Two-year-old Sophie’s shirt at the event said it all – “Slow Down. Move Over.”

Jaxx the Safety Deer brought a similar message. Musskopf said with a smile, “Be a deer, slow down and move over. Workers are near. That’s what I want them to sing to their moms and their dads when they’re in that car.

She thinks our children can do better than we do, adding “They will definitely do better than us. Their brains observe more and they want to do the right thing at a young age so if they can get their parents to slow down and move over then we’ve accomplished something.”

To learn more about the “Kait’s Love for Jaxx” foundation and Saturday’s fundraiser, click here.