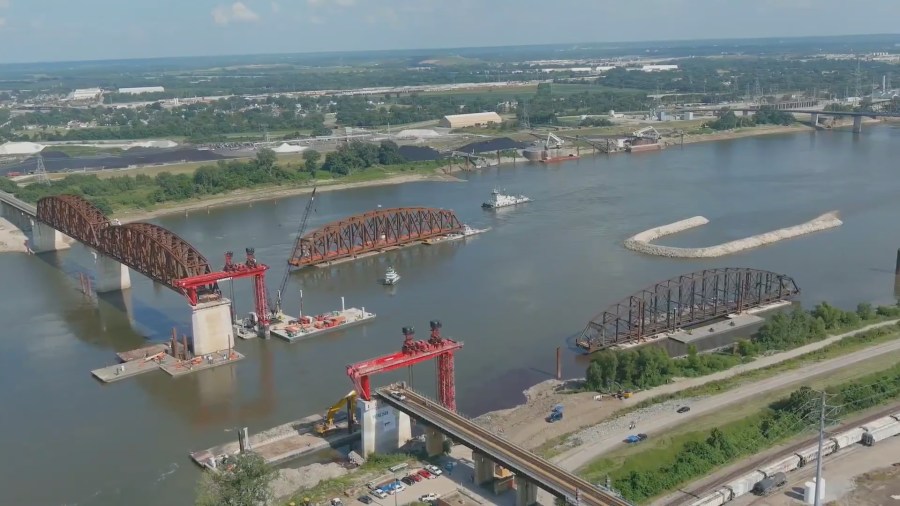 ST. LOUIS – A celebration is planned for later Thursday morning, marking the completion of the rebuild of a major railroad bridge just north of downtown St. Louis.

This is all about moving railroad freight more effectively in the region. The rebuilt Merchants Bridge over the Mississippi River is the focus of a ceremony later Thursday morning.

Bommarito Automotive Group SkyFOX was over the Merchants Bridge back on August 26 when the final piece of the massive $222 million project was put into place. Officials said the completion of this project is really the culimination of almost a decade of planning and advocacy and four years of consturction.

In fact, we’re told replacing the Merchants Bridge has been the top freight infrastructure priority for the region since 2016. Before the rebuild, only one train could cross the bridge at a time due to load restrictions over the bridge which was originally built back in 1890. However, this project has doubled the bridge’s capacity, meaning two freight trains can be on it at the same time. The freight can now move faster, more cost effectively, and more reliably.

We’re told the rebuilt bridge will provide a viable alternative to larger and more congested rail hubs like Chicago. The event starts around 9:15 a.m. and will include many different officials.