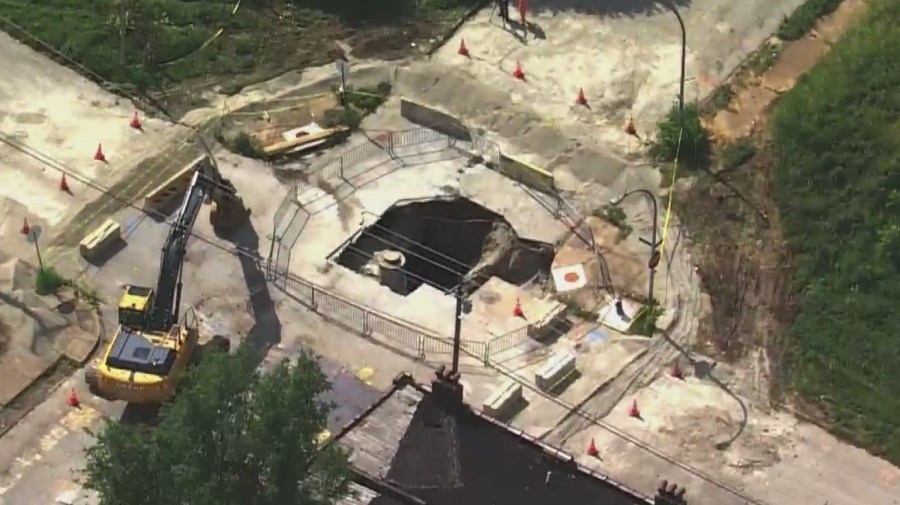 ST. LOUIS — Officials said rain caused part of a street to cave in, which created a massive hole that exposed an old sewer line in the middle of a residential neighborhood in north St. Louis.

“Go in that hole, it’s all over. You can get about three cars in it,” said neighbor Joan Berry.

“Just the soil underneath it eventually just washed out with the water getting in there,” said MSD spokesperson Sean Hadley. “It’s an old infrastructure. I mean, the sewer is over 100 years old. So, it’s something we try to address very quickly.”

Hadley said Spire was in the area doing unrelated work on Wednesday when they discovered the street collapse.

“It’s fortunate where it occurred because just east of here is a very highly trafficked area on Salisbury,” said Hadley.

The department is currently 10 years into a $6 billion revamp of the sewage system throughout the city. Officials said this street collapse is yet another example of how important it is to pinpoint which lines need to be fixed before it’s too late.

It didn’t cause any disruptions to residents’ sewage lines, but residents said what was once a small hole, has transformed into a major problem.

“I’ve seen it before. It happened before, and it was all just caved in. And there was nothing left. And it hadn’t been a problem until now,” said neighbor Johnny Rosenzweng.

The rain that caused the sinkage is a constant problem in an area known for flooding.

“We got a lot of rain come in off that hill. So when it floods, I mean this is all in the water,” said Rosenzweng. “I mean it’s just like a river on both sides.”

It’s a big concern as summer downpours threaten the cleanup of a very large eye sore. MSD will be working with two other agencies to get it fixed. Collectively, it will take around a month for the ground to be fully repaired.

How to Find the Best CBD for Inflammation