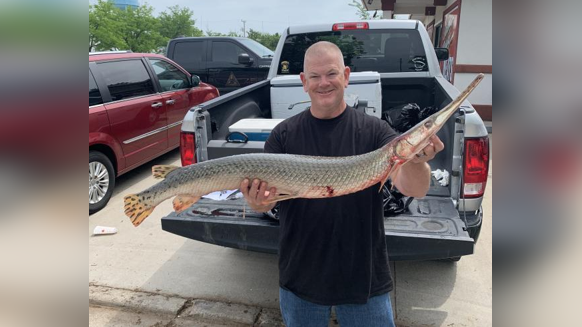 JEFFERSON CITY, Mo. – A world record fish was caught at the Lake of the Ozarks.

The Missouri Department of Conservation said Omaha, Nebraska man Rich Porter caught a state-record fish on May 16 when he took a 14-pound, 6-ounce shortnose gar by an alternative method.

Rich Porter was bowfishing on May 16 at the Lake of the Ozarks when he shot the fish. MDC said the previous state record was a 13-pound, one-ounce fish. That fish was taken from Mark Twain Lake in 2006.

“I generally come two-to-three times each year to fish in Missouri,” Porter said. “I have a friend I fish with at the Lake of the Ozarks. We were out on his boat that day bowfishing and he was playing guide for me.”

The world record fish was caught at Porter’s final spot of the day.

“Shortnose gar usually only weigh three-to-four pounds,” Porter said. “So, to catch one that big, we thought it was a longnose.”

MDC performed genetic tests to confirm the fish was a pure shortnose gar and not a hybrid with the larger longnose gar. The fish also beat the current shortnose gar bowfishing world record.

“I’m a long-standing member of the Bowfishing Association of America, so to catch a gar of this size is very exciting – it’s something else,” Porter said.

Porter’s gar is the 5th state record fish recorded in 2022.