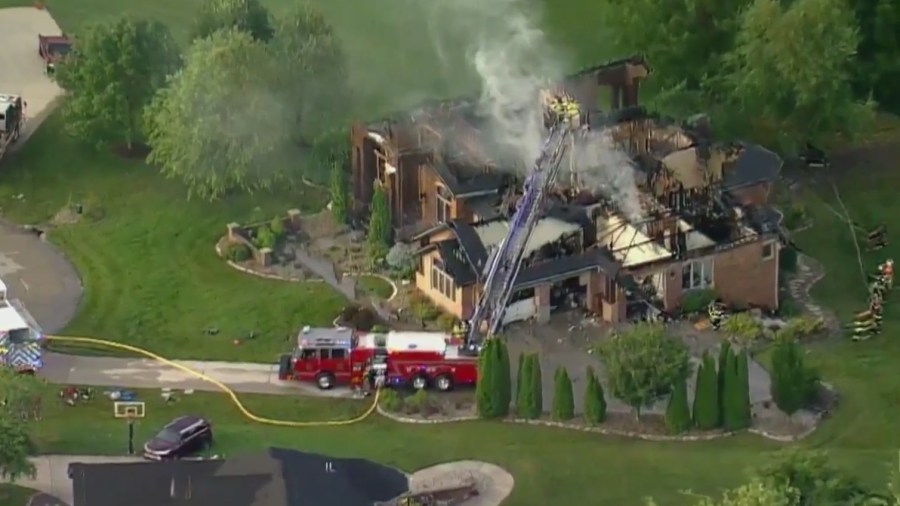 SALINE TOWNSHIP, Ill. — Firefighters responded to a house fire Tuesday morning in Madison County just outside Highland, Illinois. There were about 70 firefighters from 10 different departments on the scene. Smoke was still smoldering at 6 a.m. which was five hours after the initial call to the home.

Three people were sleeping in the home when the fire started. Firefighters said the people inside may not have survived if not for smoke detectors that not only worked but were also interconnected.

Though thankful to be alive, the family now looks at what remains, almost nothing. The 4,484-square-foot residence can be completely seen through. A University of Missouri diploma, seen outside, might be the only thing salvaged.

The family asked for privacy and Highland-Pierron Fire Chief Phil Decker declined to talk on camera because of the family’s emotions. He did answer FOX 2 questions.

The fire’s cause is now under investigation by the Illinois State Fire Marshal. Chief Decker said the homeowner reported a possible lightning strike Saturday that disabled half the outlets in the home and left areas of the main floor feeling “warm.”

The residents had scheduled an electrician, who was not able to make it before disaster struck.

“I hate to see anybody have to go through that,” said neighbor Joe Groboski.

He said he can see the home from his kitchen. He remembers hearing lightning strikes over the weekend.

Pokie Wildhaber and his wife were visiting friends in the neighborhood. He commented that firefighters used “a lot of water to put it out.”

Crews used nearly 200,000 gallons of water, according to the fire department. Chief Decker also dispelled a rumor about fire hydrants. He said all hydrants were working at regular capacity. Fire departments did haul in water, but he said that’s common practice for rural areas like this.