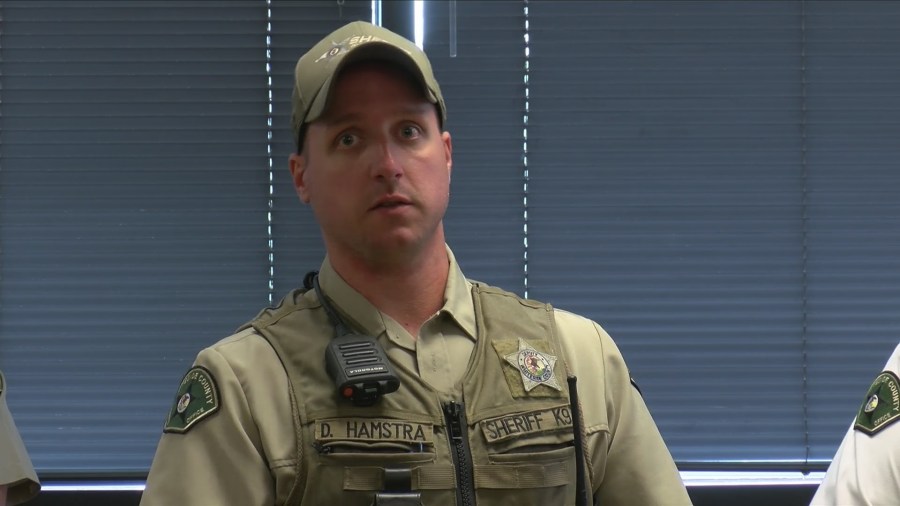 MORRISON, Ill. – For the first time in 10 months, the Whiteside County Sheriff’s Office is welcoming Derek Hamstra back on duty.

On Monday morning, Hamstra was greeted by fellow officers and family members at a welcome back ceremony at the Whiteside County Sheriff’s Office in Morrison, Illinois. Many of Hamstra’s colleagues knew his return was a long time coming because he had been recovering from an injury for nearly a year.

On Sept. 27, 2021, Hamstra was searching for two suspects who were on the run in Morrison after a chase. During the search, an Illinois State Trooper working with Hamstra inadvertently fired his gun, striking Hamstra in his left foot.

The incident led to a long recovery process for Hamstra, but he received a lot of support along the way, including dozens of first responders greeting him outside CGH Medical Center in Sterling, Illinois when he was released.

“Honestly, that was all kind of hazy,” Hamstra said of the incident 10 months later. “It was kind of a whirlwind of three days, but overall, when I came out (of the hospital) and saw everybody out there showing support for me, that was pretty awesome.”

The support for Hamstra continued from then until now. When he returned to work Monday, he received a promotion to go along with the support.

“Today, I’m officially promoting you to the rank of sergeant,” Whiteside County Sheriff, John Booker, said to Hamstra during his return ceremony. “Your dedication and hard work is so deserving, and I can’t thank you enough for being a member of our sheriff’s office, Sergeant. Congratulations, buddy.”

Hamstra said the support and recognition mean the world to him, as just a handful of months ag he wasn’t sure whether he’d ever be able to go back on duty again.

“It’s hard to put into words, honestly,” said Hamstra. “There were points I didn’t know if I was ever going to be back, you know, being as injured as I was. So, I’m just … I’m happy.”

Hamstra said he didn’t know where his career was going to take him.

“When you start your career, you don’t really know where it’s going to take you,” Hamstra continued. “So to have reached a milestone like this, it just means everything to me.”

Buyer gets result for refund on land tax sales from the City of St. Louis