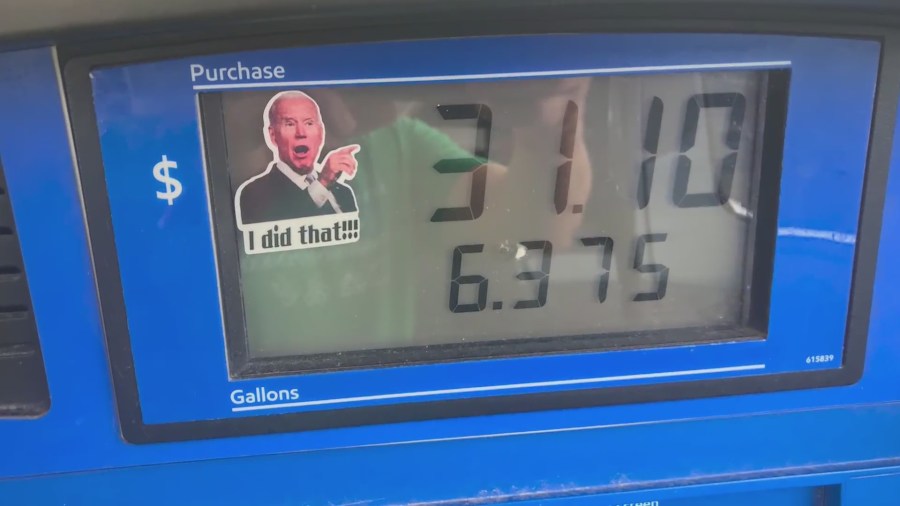 ST. LOUIS — There are new calls for people to stop putting stickers on gas pumps blaming President Biden for the  U.S. gas crisis.

From Collinsville, Illinois, to St. Louis and just about everywhere in between and beyond, people keep sticking the stickers. Gas station workers keep pulling them off.

“It usually takes a razor blade and a scraper to get them off,” said Josh Sharp, CEO of the Illinois Fuel Retailers Association, which represents gas station owners.  The group is critical of Biden’s policies and agrees they’ve been bad for business.  However, the stickers are a nuisance and even a form of vandalism.  but posting the stickers is a form of vandalism.

“(President Biden’s) canceled infrastructure projects like Keystone,” Sharp said. “I think we agree with folks about that (but) we would prefer they refrain from putting those stickers on the pumps.  It’s an issue for my members. They don’t like it.”

Pam Malta of Collinsville has bought the stickers but agrees they don’t belong on the gas pumps.

“Yeah, because they have to scrape them off.  How would you like to do that at the end of the day?  I wouldn’t,” Malta said.  “I mostly get them for my friends, just as a joke.  I’m a conservative.  I have a lot of progressive friends.  It’s just kind of sarcastic fun thing with them.”

The stickers may have had an impact.  President Biden is considering a pause in federal gas taxes to bring down pump prices.

“I’ll decide by the end of the week,” the President said Tuesday.

“We sell gas to both republicans and democrats and we’d prefer if the pumps stay free of any kind of political message,” Sharp said.

One worker told FOX 2 News they really were a nuisance and difficult to completely remove. Pumps across the area are littered with partial stickers or a sticky residue from where they were posted.

Biden just signed a law to lower shipping costs. Will it work?