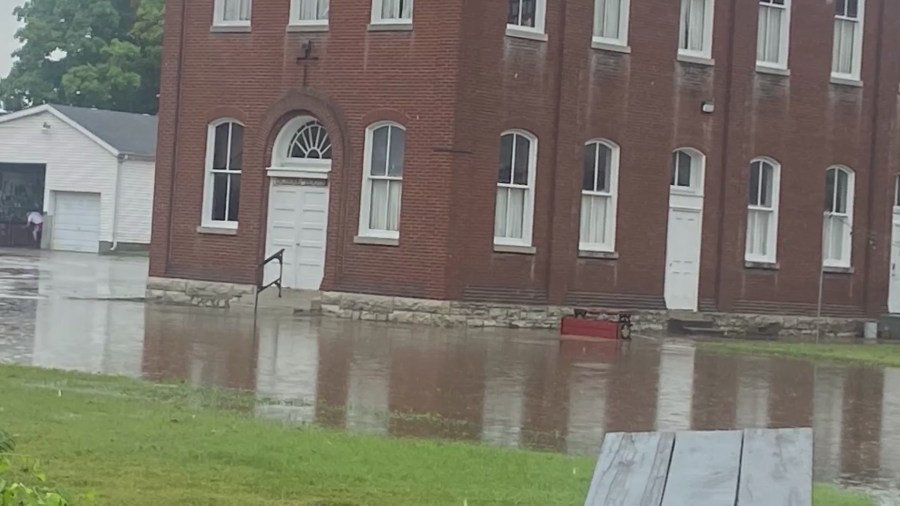 FLORISSANT, Mo. – A 200-year-old church in Florissant is closed due to damage from Tuesday’s flooding.

The Old St. Ferdinand Shrine has been in St. Louis since 1819 and it has been an integral part of Florissant.

“It’s just pleasant knowing it’s here and you can see the steeple from my house!” said Florissant resident, John Hardy.

Hardy said he was married in the church and he said he prays for the historic site after it was damaged by flood water.

Over three feet of water flooded the church and neighboring school from two creeks on either side.

“It’s nothing new here, throughout our 200-year-old history, it’s flooded many times,” said Carol Campbell, director of Old St. Ferdinand Shrine Director. “The floors raised up and have gone back down.”

The grounds include a convent, church, rectory, and schoolhouse all built in the 19th century. The floors of the church and schoolhouse are muddied and soaked through. Campbell said artwork, artifacts, clothing, and appliances were damaged.

The president of the Homeowners Association, Scott Musgrave said more than 15 events including a wedding were scheduled at the church, but it has been canceled until further notice.

“There was a polish festival ready to be scheduled down here at the end of August, they’ve canceled,” said Musgrave. “There was supposed to be an Italian Festival in October, now canceled, we won’t be ready in time.”

Crews said they have started to dry out the flooring, but it’s unclear how long the repairs will take.

“Like generations before us,” said Campbell, “We will rebuild.”

If you would like to help with repairs for the Old St. Ferdinand Shrine, a GoFundMe has been set up with a $250,000 goal.

You can find it HERE: https://www.gofundme.com/f/july-2022-oldstf-shrine-flood?utm_campaign=p_cf+share-flow-1&utm_medium=copy_link&utm_source=customer.

Stitching together the grid will save lives as extreme weather worsens