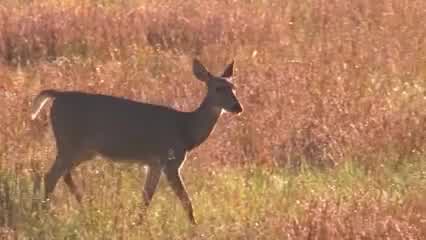 KIRKWOOD, Mo. – Autumn is here, and that means the risk of hitting deer on roads and highways is rising.

Erin Shank is an urban wildlife biologist with the Missouri Department of Conservation. She explained that the fall mating season causes behavior changes that lead to more road crossings.

“They only breed this one time of year, and they become much more active and mobile during that time,” Shank said.

Crop harvesting may also push animals into places they are not familiar with.

“Force them out of areas that they might be taking cover in, therefore they may cross more roads and encounter more cars along the way,” Shank said.

“When you’re trying to get the kids to school, and get to work, and get them home, and to practice, that’s when deer are also trying to move the most,” Shank said. “So, areas that are trees or brushy areas, be especially alert.”

Shank said if you do see a deer ahead of you on the road, keep a hold of your wheel.

“Nobody wants to hit an animal in the road, but it is worse to swerve and hit a tree or another vehicle,” she said.

Shank also said if you manage to avoid hitting one deer, remember that they might not be alone.

“You might see a deer run in front of your car, and you think, ‘Whoo, that was close,’ but slow down because there may be two or three more following her,” Shank said.

If you do hit a deer, get your vehicle to a safe location and call 9-1-1 or *55 on a cell phone and report the accident.