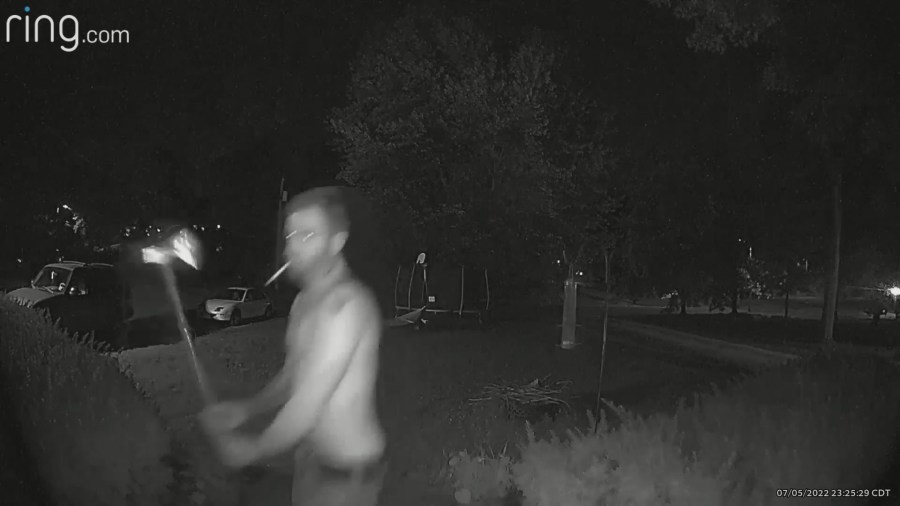 FAIRVIEW HEIGHTS, Ill. – Authorities arrested a Fairview Heights man, charging him with stalking and criminal property damage a day after he broke into his neighbors’ home with an axe.

The owner of the home that was broken into said over the last week and a half, the 36-year-old Michael Slusser has been showing signs of increased violence on his property.

The tipping point was when he broke into her home with an axe. The act was caught on camera.

On Tuesday, July 5 around 11:30 p.m., Slusser is seen on the homeowner’s Ring camera walking up to his neighbor’s home on Sycamore Drive and chopping away at the front door with an axe.

Police confirmed Slusser continued his rampage, smashing the glass windows of two of the tenants’ cars in the driveway.

The homeowner who wishes to not be identified tells FOX 2, that Slusser entered the home where three adults and one child live and started shouting, asking for his girlfriend.

The homeowner said police were told he thought someone was trapped in the home. Two of the adults were in the house at the time, and the third adult and child were not home. Despite the violence, no one was injured.

Fairview heights police along with Illinois State Police and the U.S. Marshal Fugitive Task Force, caught Slusser at his home next door around 2 p.m. on Wednesday, July 6.

He barricaded himself in the basement, refusing to surrender. Eventually, he was arrested and taken into custody.

He was charged with one count of aggravated stalking and three counts of criminal damage to property including the home and car windows. His bond has been set at $150,000.

Last month, on June 8, one neighbor called the police on Slusser after seeing him trespassing on his property. Other neighbors said they have seen him lurking around their homes.

The owner of the home that was broken into said the suspect told her in the past that he was hearing voices. She said she filed an order of protection in May.

Since then, he’s broken the order, the homeowner said she had to have him arrested twice. His past behavior is something that will be investigated as Slusser remains in custody.

Disney wanted to sign Dr. Dre after success of ‘The Chronic’