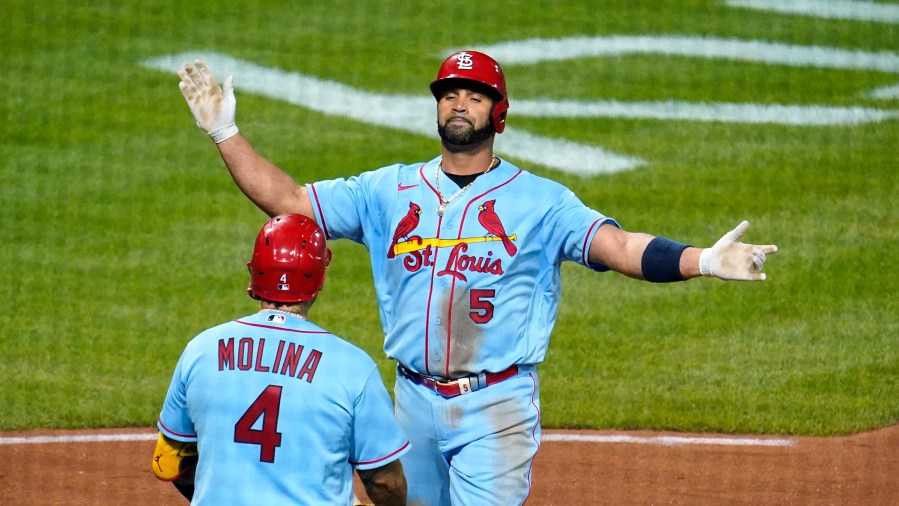 With St. Louis down 3-1 in the sixth, Pujols connected on a first-pitch slider from JT Brubaker. He sent a two-run shot 418 feet into the left-field bleachers at PNC Park, launched with an exit velocity of 111.2 mph.

Pujols also doubled and singled for the NL Central leaders. His RBI single in the eighth made it 4-all.

Nolan Arenado broke the tie with a three-run double with two outs in the ninth off Wil Crowe (5-9).

Giovanny Gallegos (3-5) pitched a perfect eighth inning for the Cardinals. Ryan Helsley allowed a two-out RBI single from Bryan Reynolds in the ninth before getting Rodolfo Castro to ground out for his 15th save.

NL batting leader Paul Goldschmidt was 0 for 4, dropping his average to .325. His two-out walk loaded the bases in the ninth.

Oneil Cruz put the Pirates ahead 4-3 in the seventh with his 14th homer, driven over the Clemente Wall in right. The 23-year-old rookie singled in the first, extending his hit streak to a career-best seven games. He is 14 for 30 (.467) during the streak.

Pittsburgh took a 3-0 lead on a pair of homers off Jack Flaherty in the first two innings, a solo shot from Castro in the first and a two-run drive from Jack Suwinski in the second. Flaherty went five innings, giving up three runs on six hits.

Brendan Donovan cut the deficit to two with a home run in the Cardinals fifth.

Pirates: RHP David Bednar threw a live batting practice on Saturday. The All-Star closer has been on the injured list with lower back tightness since Aug. 3.

Cardinals LHP José Quintana (5-6, 3.41 ERA) will return to the mound in Pittsburgh on Sunday, going opposite RHP Mitch Keller (5-10, 4.22). Quintana and RHP Chris Stratton were sent to St. Louis on Aug. 1 in a trade that moved RHP Johan Oviedo and INF Malcolm Nuñez to the Pirates. Keller allowed five hits in six shutout innings against the Mets his last time out on Tuesday.