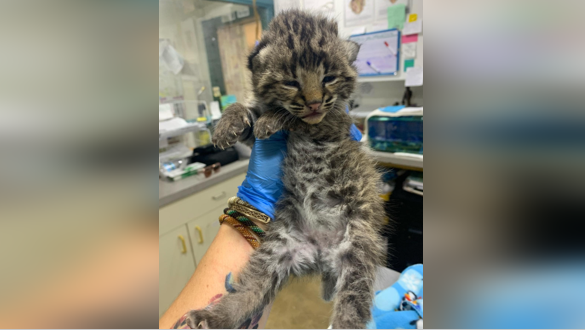 JERSEY COUNTY, Ill. – A bobcat kitten was taken to an Illinois wildlife center after she was found alone in Montgomery County, Illinois.

The kitten was taken to Treehouse Wildlife Center in Dow, Illinois on Friday, September 16, according to clinic supervisor Kerry Lennartz said.

The Illinois Department of Conservation found her while they were clearing some brush in Filmore, Illinois. She was severely dehydrated and along. It is unknown if the kitten was abandoned, but the mother was not around at the time. She may have been scared off by the department workers.

In a Facebook post, Treehouse said, “After being a little fussy at first, she is now taking formula well and is vocal and active!!”

The bobcat is approximately five weeks old and takes formula five times per day. Her formula will start to have solid meats in it next week.

The kitten will be weaned from formula when she is three months old. Over the winter, she will live in one of the center’s outdoor enclosures. There, she will interact through the fence line with the center’s two resident bobcats.

Lennartz said the clinic is hopeful the kitten will be able to be released into the wild at some point.