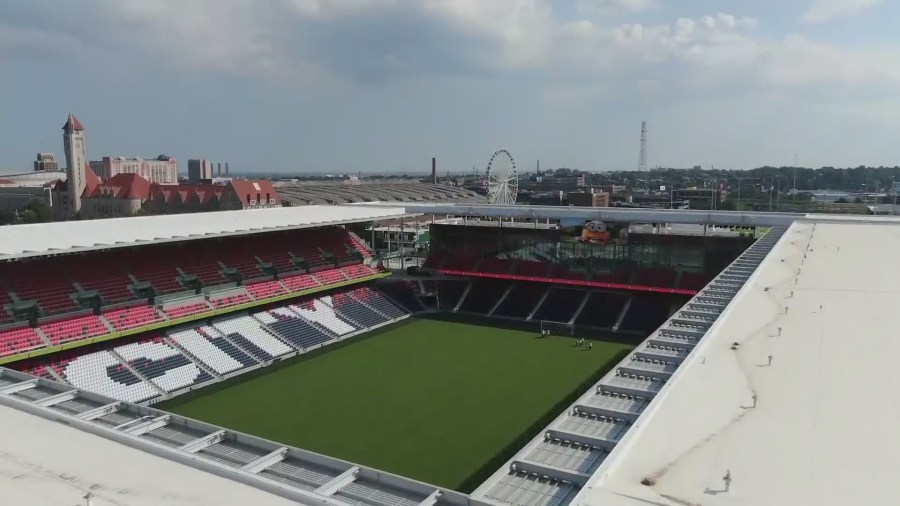 The close to half-billion dollar Centene Stadium and soccer training complex has its own power plant, situated between the two. It is separated by Market Street.

The City of St. Louis has an ongoing, estimated $17 million street improvement project outside the stadium. The problem stems from work on the new 22nd Street extension adjacent to the stadium’s west side.

“We are working with our construction and operation partners to resolve the current situation with Centene Stadium’s internal power distribution system and restore full power to the stadium. We will provide an update on overall progress as soon as one is available.”

The new MLS team, St. Louis City SC, will begin to play in March 2023. Mueller did not say when the issue would be resolved regarding the power. However, parts of the stadium did have power on Monday night.

“You start to put together pieces, and you’re like, ‘OK, this sounds like it was just a disaster,’” said Mitch Morice, of the ‘St. Louligans’ soccer fan group.

The ‘St. Louligans’ and Schlafly Brewery planned a street party for thousands of fans outside the stadium this past Sunday before what was supposed to be the first-ever game at the new arena.

The “City2” team’s regular season finale game in the MLS Next Pro developmental league was supposed to be hosted at the stadium. The game had to be moved to Southern Illinois University Edwardsville (SIUE).

“City2” is hosting a playoff game this coming Sunday, but St. Louis City SC has just announced that the game will also be played at SIUE, not at Centene Stadium.

Morice said if things go right, maybe the stadium will still host its first game in the next few weeks. The members of his group have been to MLS stadiums in dozens of other cities, but he said it doesn’t come close to the new arena in St. Louis.

“It’s going to be the class stadium of the league. (On) Sunday, we watched the (City2) win. The following week, we watched them win,” Morice said. “Then open ‘Louligan Street’ with Schlafly and prepare for that final in the ‘big house.’”

If the “City2” team wins Sunday night in Edwardsville, St. Louis could end up hosting two more playoff games, including the championship on Oct. 8. There was no word yet from St. Louis City SC, Monday night, on whether that remained a possibility.

Macklowe v. Macklowe: History and Impact of one Divorce upon the Legal Landscape