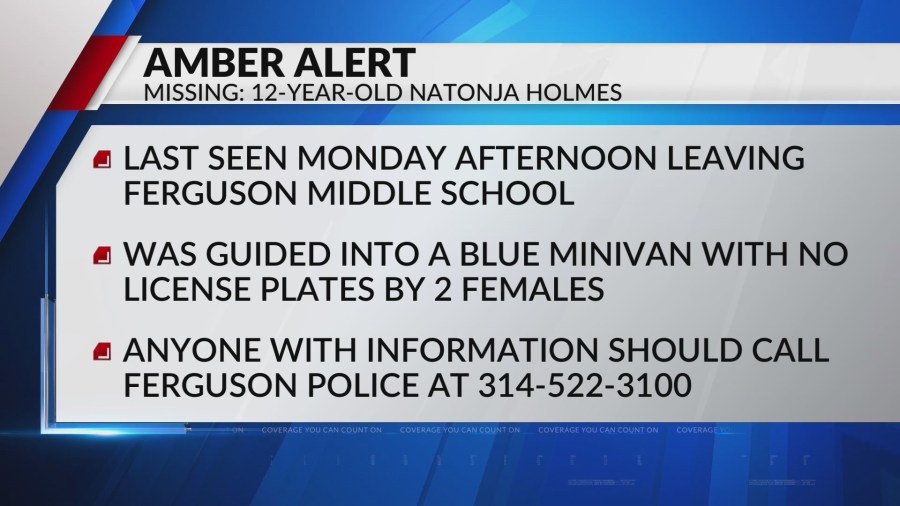 ST. LOUIS – An Amber Alert was issued overnight for a 12-year-old Berkeley girl who authorities believe was kidnapped as she left her middle school in Ferguson Monday afternoon.

Detectives at the Ferguson Police Department are investigating the case. Authorities said it started as a missing person case but was elevated to an Amber Alert and kidnapping investigation once critical surveillance video surfaced.

Here’s a look at a picture of the girl who is missing. She is identified as 12-year-old Natonja Holmes. Authorities said Holmes is 4’7 inches tall and weighs 120 pounds. She has brown eyes and her hair was braided. Holmes was last seen wearing a white t-shirt and blue jeans.

Here is what we know from Ferguson Police. Authorities believe there are two female suspects. Investigators shared that Holmes was leaving Ferguson Middle School on Monday afternoon at 2:30 when one of the suspects wearing a pink hat and turquoise leggings was captured on surveillance video from the school guiding her by the arm into a blue minivan.

Police said the minivan did not have either front or rear license plates. Authorities explained that the minivan could be a 2008 to 2010 Kia Sedona but it could also be a Dodge minivan.

This happened Monday afternoon, but the Amber Alert was just issued late Tuesday night. Ferguson police explained the timeline. They said Natonja’s family filed a missing person report when she did not return home, but police did not have evidence of a potential abduction until authorities saw the surveillance video from the school showing Natonja being led to the minivan by the one suspect.

Another major concern for authorities is that Natonja’s family is telling police that they don’t know the woman who put Natonja into the minivan. If you have any information, you are asked to call the Ferguson Police at 314-522-3100.